Essay excerpt: A Letter From Paris

[This essay was originally published in Hidden Compass, November 2017)

As the bus pulled into Saint Clair after the long journey from Toulon in the South of France, I finally let myself believe I’d see it: The place my dad had stayed almost seven decades earlier.

It was a treasure whose existence I had long given up on finding. But exist it did, as miraculous as the letters that led me there.

The letters that came from Saint Clair.

Ever since I’d found my father’s papers — softened by time and hidden in the dusty, mislabeled boxes of various libraries — all I could think about was Saint Clair.

“Saint Clair is a dream of the South,” Dad wrote. “Saint Clair, Le Lavandou.” Even the name sounded like a song.

The papers, filling hundreds of boxes in both Melbourne and Canberra’s state libraries, looped and crossed time — decades — but they always came back to Saint Clair.

A poet’s villa. A lost love.

Nights spent drinking with authors he’d once dreamt of meeting.

Hope, relief, rediscovery of something they’d all lost during the war.

And a nightingale who sang during the day. 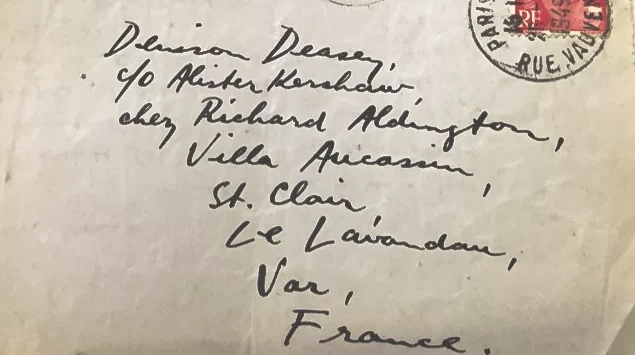 Envelope from a letter from Albert Tucker to Denison Deasey in St Clair. One of over 500 pieces of Saint Clair correspondence from the 1940s and 1950s

Dad died when I was six, so I’d never known of his life in France, the thousands of stories that filled all those decades. My mum, Dad’s siblings — the connecting threads to that time were also long gone.

But I had found his papers in the library. Hundreds of manuscripts — typed and handwritten — lay in boxes in a protected tomb.

On my first trip to visit the archives last year, I found that the pages from Saint Clair had a scent of life so fiercely passionate, it was as though Dad was there with me.

We were sitting side by side, and he poured me a drink.

He wanted to tell me a story.

It was March 1948, and he’d been in London for eight months. Gray skies and biting winds were cruel punishment to a body that had caught tuberculosis on the boat ride from Melbourne.

“This seems like life again,” Dad wrote. “Winter has ended for me.”

During the war, Dad had suffered in a Commando holding camp, and after Victory Day celebrations were over, his next battle was to get to Europe. “It wasn’t so easy,” he wrote. “Passages out were strictly rationed.” But he talked someone into renting him a bunker on the lower levels of the SS Asturias. He wanted to see France. Ireland, too. But first, he had to get to England.

Six weeks. No windows, no trips out on deck. God-awful, meager packets of food. And a crazy captain addicted to speeches.

In London, holed up in a studio apartment in Kings Cross, Dad got sicker and sicker. Eggs, fresh fruit, and butter were unavailable, as, it seemed, was cheer. But an Australian friend, Alister Kershaw, a poet who’d been just as desperate as Dad to escape Melbourne, wired him from Saint Clair. He was staying at the Villa Aucassin with Richard Aldington, an English poet who had published numerous books and had known D.H. Lawrence, Ezra Pound, Thomas Hardy — even T.S. Eliot.

“You can eat well, Dease, and rest, and talk books. Come stay with us in Saint Clair.”

There was sun, eggs, fresh fish. Beer from Alsace. Even the wine was unrationed.

Londoners warned him against it, whispering that the French had even less food than the English. But Dad still caught the plane to Marseille, tottering down the steps — “like an octogenarian clutching my wretched wind-pipes” — and was greeted by warm air and men in berets. Grunting in French through the stubs of cigarettes in their mouths, they delivered his bags to a bus.

“This seems like life again,” Dad wrote. “Winter has ended for me, the long winter of Australia and England, all I have ever seen, where people sit in gardens hidden behind houses … or drink in closed institutions with their backs to the street.”

“Here, I see the war was worth it,” he continued, recounting the fish, the bread, the smiles on the faces of the men drinking pastis apéritifs in their berets nearby.

A particular detail of that first meal in a bistro struck him.

“The French sit facing the sun.”

Mornings at the villa were for writing — Aldington would tap away at his typewriter upstairs, working on a series of poems. 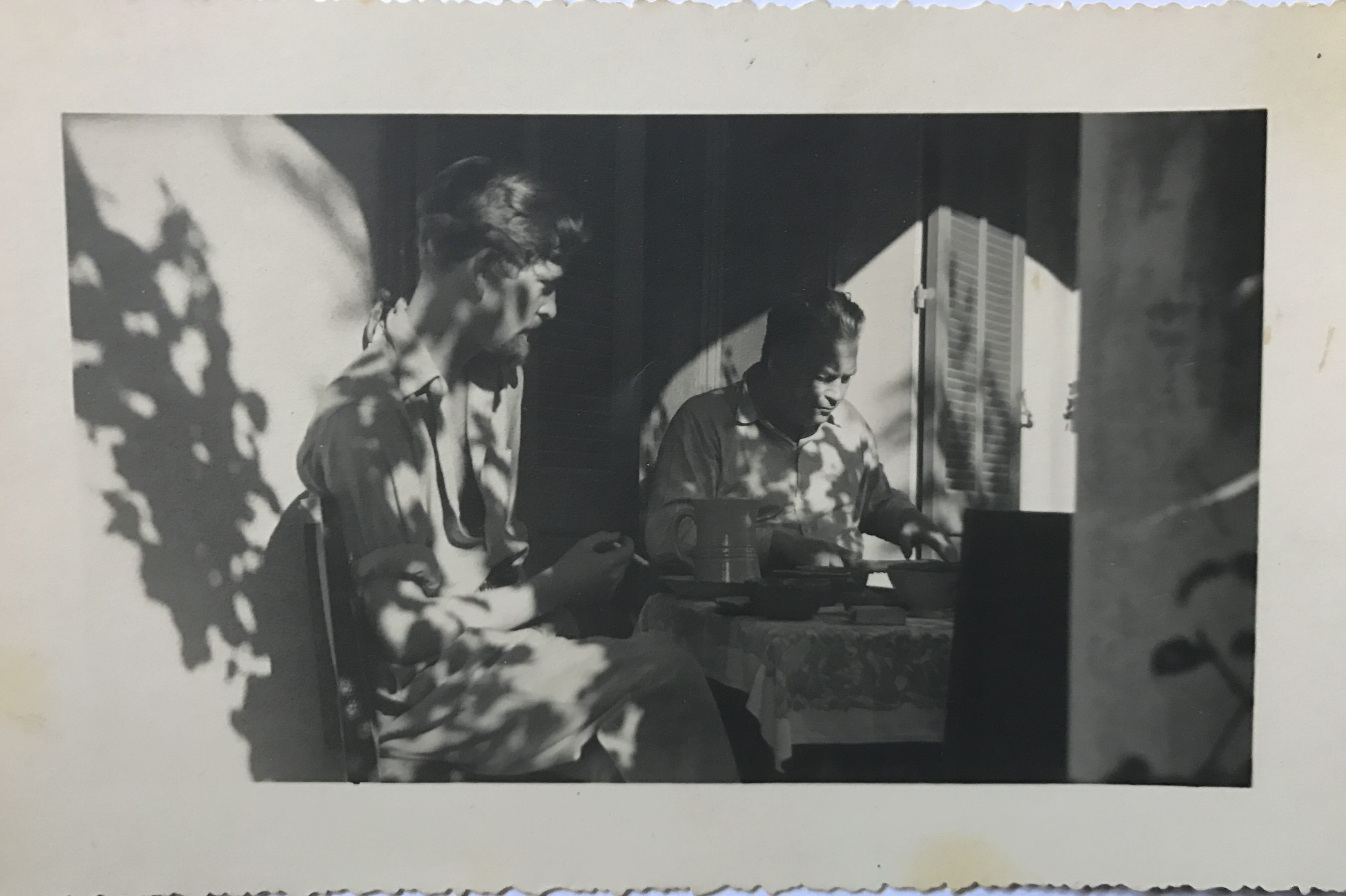 Dad lodged at the inn down the road. He wrote in his sea-facing room during the day, then made his way up the dirt track to the villa for the cheese course. Finally, he had people he could talk to for hours about books and poetry and art and theatre. Aldington even got the piano tuned so they could sing and dad could play.

In the afternoons, they’d swim in the cool waters of the Mediterranean, reuniting inevitably in the evening for another round. They would spend balmy nights playing records and talking with other artists, drinking the unrationed wine that Aldington kept in strong supply despite his moderate means. Or, they’d drive up to Bormes, to the little bistro café that overlooked the ancient village, where there was a weekly dance.

It was meant to be a short visit.

Some sunshine, some rest. A chance to see France.

For a year I sat hunched in the tomb-cold reading room in the Melbourne state library. It felt destructive, really, unearthing Dad’s life and loves. The struggle felt futile; he was gone.

But I had to get to the end of those pages. And I had to go to France.

When I first searched for the villa, many doubted it still existed. From Australia, I couldn’t even seem to figure out if the restaurant was still open.

I’ll just go to the town and knock on doors, I decided foolishly, conveniently forgetting how bad my French is, and how little English is spoken so far from the capital.

But then, there it was the next morning: the email from Raphael, the local cultural advisor. A miracle!

According to the message, not only did the villa still exist, but this man could take me there!

He arranged to pick me up from the bus.

When Raphael met me, I felt so overwhelmed by my arrival that I had to fight back tears.

It was just as dad had described: “A small bay between two rocky points, a scatter of small houses, mimosas and eucalypts, vines and olive trees half-circled by low hills.” At heart, exactly the same.

The little beach, the same one which had cleansed Dad’s war-wearied body, lapped gently to my right as Raphael took my suitcase. From the front of my hotel, where I could hear the waves of the Mediterranean from my balcony, I could even see the path to the villa, still half-hidden by trees as dad had described. 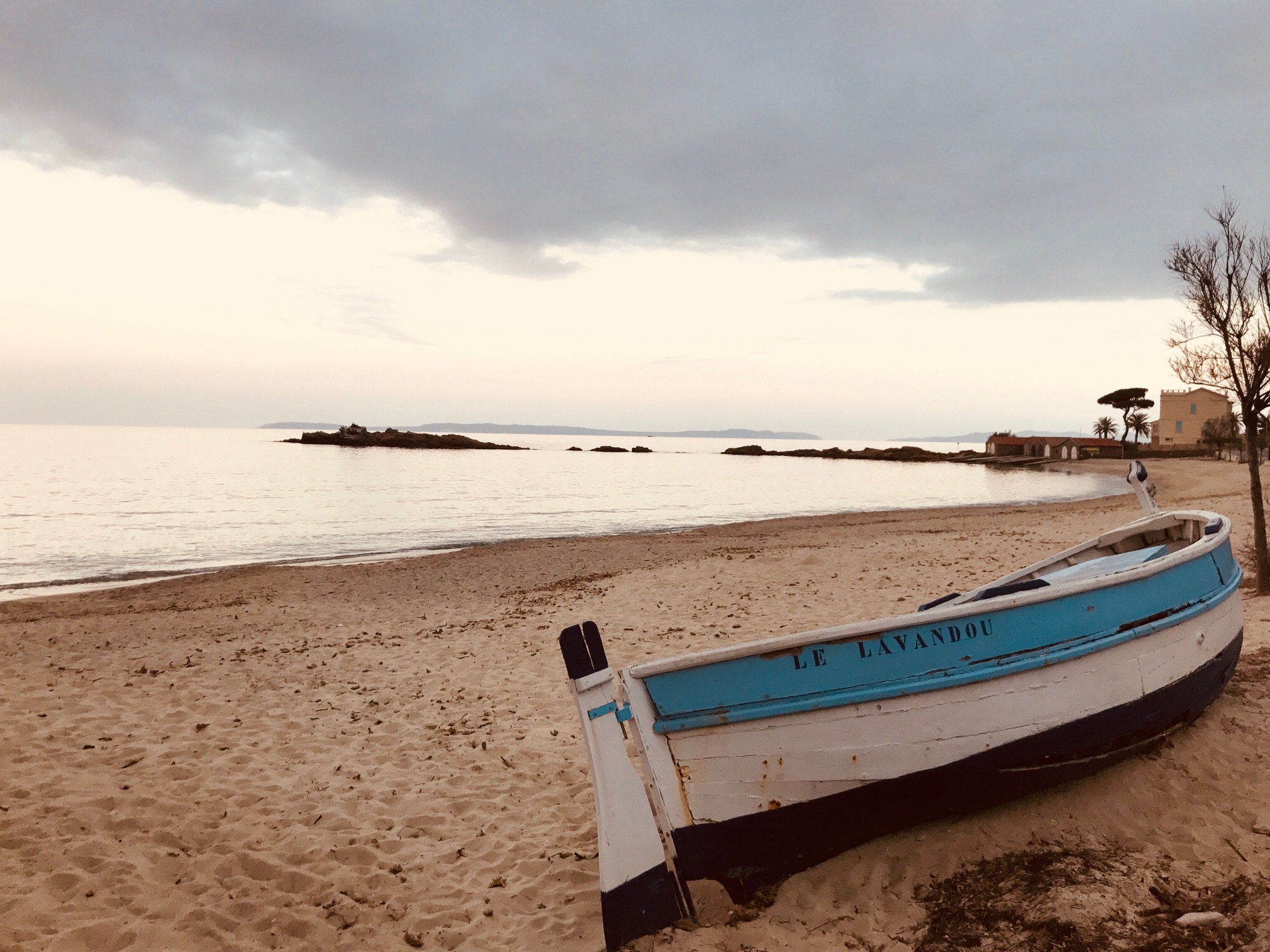 The sense of relieved “homecoming” that dad felt on that precious March day in 1948 was still there. It was palpable in the lively scent of sea and citrus, in the stately presence of the mountains of Bormes, and in the calm quiet punctuated only by the odd car.

Dad never stopped writing, and neither did Aldington or Kershaw. “Did we ever laugh as much in our lives?” Kershaw wrote.

Raphael made a booking at the town’s sole restaurant, Les Sables D’Or, and met me at noon the next day. It was once the inn where dad had stayed in his upstairs room that overlooked the sea. Out front was the same plane tree that would scratch dad as he tottered home from those nights at the villa. Raphael and I sat beneath it.

Every time Raphael spoke to the villagers about the reason for my visit, I would notice a look of kindness, of respect — for time, for history — on their faces.

She’s here to learn about her dad, who lived here after the war …

There’s a word I learned, in Saint Clair, because I was searching for a way to explain how I felt when I stayed there.

Nepenthe: Something so beautiful that it erases feelings of sorrow or grief.

When I woke in Saint Clair the first morning, after a sleep so long and so deep I was momentarily unsure where I was or when, I opened the curtain a crack. As the room brightened and church bells rang and a rooster crowed, I knew I was home. It was like the end of a pilgrimage, the closing of a circle. It was more than the end of a journey to understand where those letters had come from. It was the end of a year of angst and sorrow, wedged stiffly in the library, weeping with every new discovery in my quest to get to know Dad.

Dad was in everything that I loved about Saint Clair, and he was in every part of me that took the risk to search for it.

The kind of person who journeys across the world because of a letter.

The kind of person who — no matter the battle that’s gone before — chases joy.

Even the innkeeper at Saint Clair cried when Dad left for Paris.

Dad never stopped writing, and neither did Aldington or Kershaw. In their correspondence, they kept remembering the magic of those summers in Saint Clair. “Did we ever laugh as much in our lives?” Kershaw wrote.

I found some 500 letters recounting their time at Saint Clair.

On my last day, I received one final treasure.

It had started to rain as I packed my suitcase, and I received a message from the caretaker.

“Come to the villa. You will be comfortable here.”

I hadn’t expected her to leave me the key.

It was different being left alone in the villa. When the gate locked shut, I walked the circumference of the garden from lemon tree to mimosa tree and sat on the stone porch that looked down to the sea.

Then, in a sort of stupor, I wandered from room to room in the 1920s-built mansion. I walked upstairs to the master room, and looked out the shutter windows to the ocean, almost hearing Rachmaninov on the gramophone, almost tasting the alcoholic bite of the pastis. I could feel love and peace emanating from the floorboards, coming from all who had lived and laughed there, and all the poetry they’d created.

I smelled the mist rising up from the garden, the Mediterranean air dad had inhaled in 1948, and I remembered his words.

Here, I see the war was worth it. 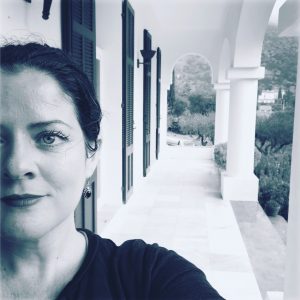 The author at the Villa Aucassin, Saint Clair, March 2017

About the Author: Louisa