Use the 3 Act Structure to write your memoir

There are only two or three human stories, and they go on repeating themselves as fiercely as if they had never happened before.
Willa Cather

Every memoir is a personal story – a battlefield, if you will, where the central character (you) must overcome some key challenge to get to the other side, or a ‘new’ point of view and a change in perspective.
Screenwriters use the three act structure for movies and TV series, but i’ve found it essential in memoir writing, because it’s based upon the archetypal hero’s journey.

Knowing the basics of the three act structure is a little like knowing the basics of every musical score: you have the intro, the chorus, and the pieces on each side. The following gives you a taste of how i break down the process of writing a memoir.

The three act structure is based on the premise that the chapters which fill each ‘act’ have a key purpose in fulfilling the journey or quest of the central character (you, since it’s memoir) in the story.

Knowing the outline of the three-act structure helped me draft my second (and much more difficult) memoir A Letter From Paris much quicker than Love & Other U-Turns, because i was able to quickly locate where to start the ‘journey’.

It also helps you condense a fairly gigantic personal story into a more objective story that follows particular plot conventions (you don’t just throw everything that happened, into your memoir). Story structure helps you see the personal, impersonally, if you will.

Each ‘act’ has a number of scenes or chapters, and each ‘act’ varies in length, but the purpose of each act is outlined below.

Having a visual of the three act structure (or just a few key words up on your desk) helps you as you’re drafting your memoir, because you start to understand the archetypal meaning behind each aspect of your journey or story. It can also save you from going off on a completely unnecessary tangent of thousands of unnecessary words / side plots.

Act One: The Set-up

This ‘act’ traditionally includes a few scenes of ‘normality’, followed by an inciting incident or catalyst event (for example, in A Letter From Paris, it was the email from Coralie), followed by ‘second thoughts’ or doubts as to whether you want to commit to the journey.

Whatever your memoir is about, to introduce us to the world of ‘you’ before the inciting incident or catalyst event, we need to see what you considered normal.

If you’re writing a self-help book, you might show how the ‘old’ you used to behave or think or feel before you discovered whatever the tool or trick or helpful piece of information it is that you’re about to share through the course of the book. It’s important to establish your ‘point-of-view’ before or during the catalyst event, so that the reader knows whether or not you can handle the journey, and where you’re at in life, when it happens.

For example, if your catalyst event was a cancer diagnosis, who and where are you when this happens? Are you securely married with children, or are you in your twenties, living it up happily with champagne-fuelled parties and trips to Ibiza? Perhaps you’ve just received a massive promotion at work… Who and where you are, when the catalyst even happens, are necessary to illustrate the contrast and the ‘change’ that comes from the catalyst event. Begin your memoir with your previous version of ‘normal’… Show, don’t tell. If you’re single, don’t just say “I was single” – write a scene where you’re flicking mindlessly through tinder on your phone, or attending a wedding without a date, etc. This will show how you felt about your previous normal, too.

This act is when you shift from tentatively dealing with your problem (or the ‘journey’ of the memoir) to being ‘all in’.

You must contain a key scene or chapter which shows that you have clearly made this commitment. And, you would also include all the key battles you came up against on the journey to achieve or overcome or fulfill the basic premise (goal) of the memoir.

Act Two typically contains chapters about obstacles you met on the path to confronting the problem. For example, in Lit, Mary Karr’s memoir about her alcoholism and where that stemmed from, the majority of the most extreme examples of her alcoholism were in the second section of the book. Somewhere near the end of the second act is a crisis or disaster which will then signify the shift to act three, where the action starts to recede and the lessons of the memoir (or story) start to integrate into your new world-view.

In this act, you still have some questions to resolve, and the last climax would come part-way through the third act (for example, if your memoir is about cancer, the treatment would perhaps be working, or you’ve come to a new perspective about the whole journey – and this doesn’t crystallise until that climax of the third act). After that climax, there can still be a few obstacles, but they’d be smaller than the obstacles you encountered in act one and two, and finally you’d ‘wrap up’ the story and all that you’ve learned and how you’ve changed since the beginning.

This is a very basic run-down of the three-act structure. Below is my very rudimentary pinboard visual when i was mapping out the draft of my second memoir, A Letter From Paris. 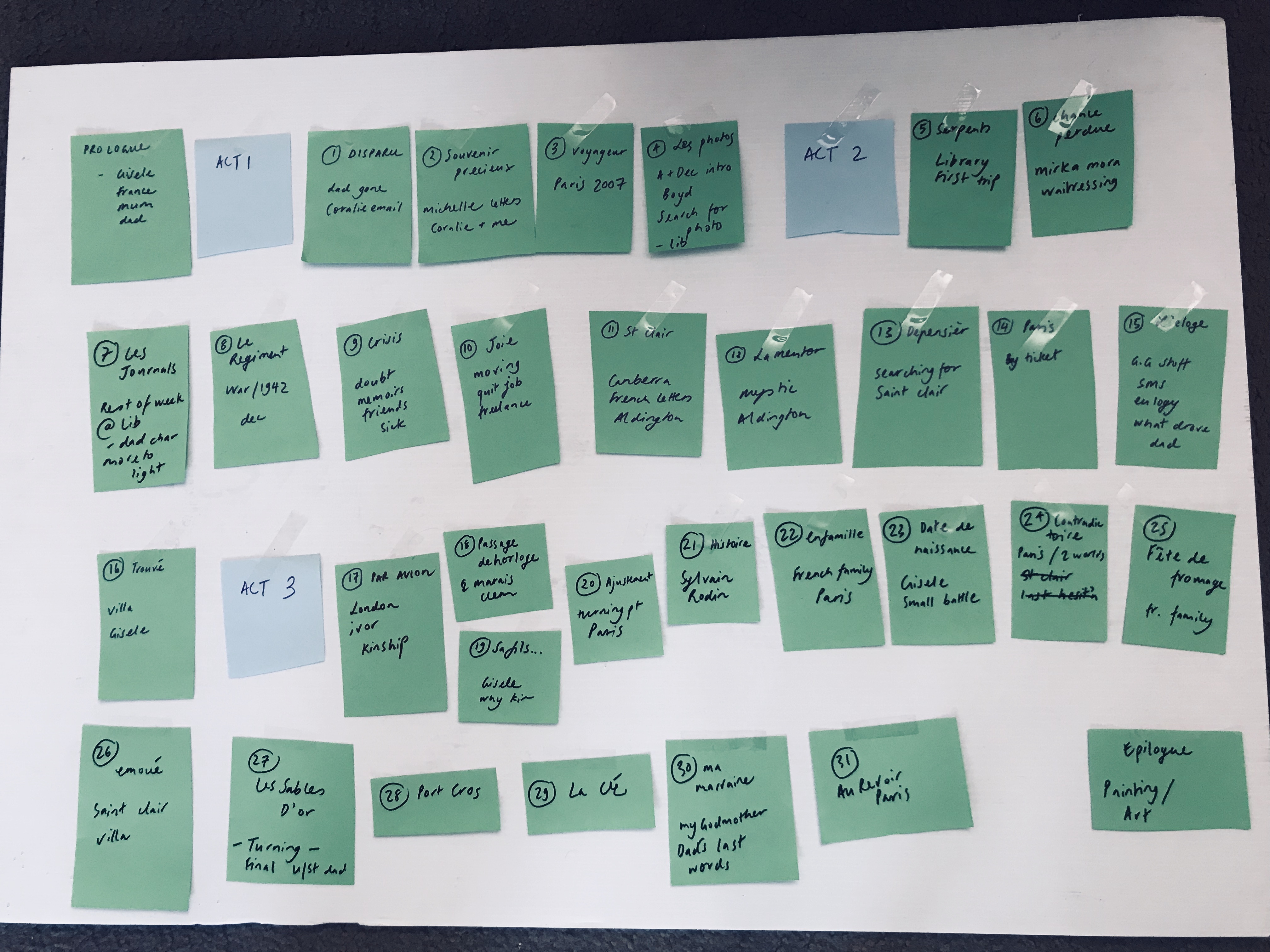 A Letter From Paris chapter layout at third draft stage

Using the three act structure is a great way to nip any writer’s block in the bud, map and plan your memoir and meet your deadline. It’s fantastic to have a visual to refer to if you’re feeling overwhelmed, and keeps you working on things that will most probably be included (after you’ve re-written and polished them a lot) in the final manuscript.

For my blueprint for writing your draft with my favourite prompts from the 3 Act Structure including checklists and templates for each Act, check out 90 Day Memoir. You’ll clearly define your story’s beginning, middle and end as well as understand the key archetypes necessary to a page-turning memoir!

About the Author: Louisa