I know May isn’t over yet, but it’s held some delightful memoir discoveries for me. If you’re after some recommendations of memoirs to read, watch, or listen to, let me share what I’ve been loving this May!
Click on the link in the title, if you’d like to know more.

Maybe You Should Talk to Someone by Lori Gottlieb

I’m a very slow reader at the best of times and I bought this on the very last day we had open bookstores in Melbourne in March before lockdown. I knew nothing about Gottlieb, but the topic of therapy – and the chance to gain insights into the process for a therapist inspired me to buy this book. (Love’s Executioner by Irvin D. Yalom is another excellent one).

This memoir is a masterpiece. Gottlieb skilfully feathers her patient’s stories with her own, building the plot and dropping breadcrumbs to keep you turning the pages all the way through. What I love about therapy memoirs is the way our method of storytelling is examined. As Gottlieb said in her Ted Talk, the job of the therapist (and the client) is to understand how we could be editing our stories.
One of the more interesting anecdotes in Gottlieb’s tale (as a writer I pounce on these glimpses into the book deal!) is where she references the six figure book advance she was offered when a piece she wrote for the Atlantic on parenting went viral (see how a memoir essay can be your ticket to a book deal?). 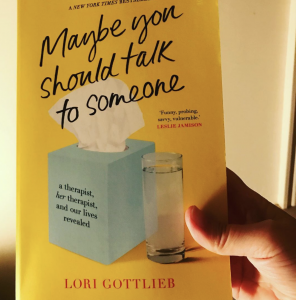 But she didn’t want to write that book (all the more reason to be very strategic when you’re pitching essays for your book deal!).
She also didn’t want to write the happiness book she pitched after that (“the happiness book was making me miserable” is one of my favourite lines) and so, thankfully for us, we instead got Maybe You Should Talk to Someone. The catalyst event for this story was when her boyfriend decided he didn’t want kids – even though he, and she, had been living with her young boy for some years by then. I love the honesty in which she reflects on referring to him as the “kid-hater” every time she referred to him in therapy, or with her friends. Characters such as ‘John’ – the narcissistic film executive change and develop through the story and what I think she does so masterfully is help you to see how multi-layered we all are. It’s a work of empathy, really.
If you’ve ever been curious about how someone becomes a therapist, and what the experience is like from their perspective, you’ll love this book. 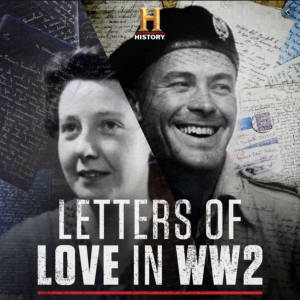 This time last year, I successfully funded a kickstarter to publish my dad’s lost WW2 French-Australian memoir. The material I’m working with is historically-significant, and working through my dad’s papers has been an absolute labour of love, but also very complicated.
My father’s material is held in a special collection in the State library Victoria, and it’s not easy for me to access any of it (right now – since the library is closed indefinitely, I can’t see any of it). The project was created as a way for me to fund digitising a printed memoir that I found in the library that covers his life from 1947 – 1955, mostly in post-war France.

But as projects do, once I started looking into the boxes and finding other material – hundreds of letters, documents that would add further info to the printed manuscript, it’s become something else. I swing between seeing it as many books to complete overwhelm at how to condense his mass of material, particularly when I can’t readily access certain boxes with missing letters or chronological details – and so it goes on.

I don’t know anyone else who has written or published their dad’s memoir or even had to go through a convoluted process like this. It’s hard to explain how difficult it is to get the material out of the library: much of it is undated, most of it is handwritten, and the room in which I’m allowed to visit the material has strict rules about no phones, cameras, pens, water, etc etc. It’s a labour, that’s for sure.

And then I found Anna’s podcast.

I binged on this entire 8-part series on Monday night – it’s exquisite.

The story is of Cyril and Olga – a young married couple from Sheffield in England at the outbreak of WW2. The letters (over a thousand, but only a fraction of those, and only sections of these, are featured in the podcast) cover the six years they were separated by war. He to fight in Morocco, Alamein, eventually leading the first tank over the Rhine to liberate Bergen-Belsen – and she to stay back and work as an emergency signaller.
It’s exquisitely-produced – actors who play the couple layer the letters with so much depth of feeling and the sound effects really help you feel as though you’re there. Their children – and grandchildren, who never knew of Cyril’s experiences, particularly liberating German and Italian camps – provide another insight at the end of each episode.
What I appreciated, from a storytelling perspective, was a new way to tell my own father’s story. And it was fascinating, because i know Anna, who wrote the podcast – to learn how someone condensed such a mass of material into a rolling narrative that would be so touching.
The podcast is fascinating as much for what isn’t said, as what is said. When you hear some of the letters being read, you really get that sense that each would have taken days to write, each letter was read maybe 16 or 17 times, many would go missing… And it was these gaps in letters and chronology that are so skilfully-woven, and gave me a new insight into how i could tell my own father’s (complex and convoluted) story.

Speaking to Anna, she shared that it took her over a year to read all the letters, then she went through selecting which ones to include, how to thread the story when a reply might have gone missing… how to arrange the dates. If you listen to the podcast, you’ll understand how significant the dates were – the dates, from what we know now about what happened during WW2 – are almost like an extra narrator.  Anna flew to England, meeting Cyril and Olga’s children, who had uncovered the letters in their parents attic after Cyril had died, in 2014. They’d printed a book (just for the family) of the letters, until Anna came along and turned it into something for the world to enjoy.
I hope I can bring that many layers to my father’s story when I publish his manuscripts. I already have an outline for my approach, since listening to this podcast.
Settle in with this podcast and take a trip back in time. It’s more than a love story – if you like history, you’ll be fascinated at the glimpses into how people changed during the many years of the war. And – during this uncertain time, you’ll pick up on some similarities with our current global crisis.

Other things I’ve loved discovering, watching, doing in May…

What about you? What have you been reading, writing and creating this month? What’s been making you feel happy and inspired? I’d love to hear!