Two mistakes that add years to your publishing timeline

Are you unwittingly making these mistakes in your memoir publishing journey?

If your memoir is the first book you’ve ever written, you’re probably making one (or both) of these mistakes and they’re adding years to your publishing journey. Worse, they could blow your chances of being published altogether.
Stories are timely, and we need to catch the momentum on high tide – if you wait and worry and finesse something for too long, you might miss your chances for a book deal.

These mistakes will thwart your publishing dreams and keep you stuck on a loop of feedback and finessing, without moving forward. Flash-forward ten years and you and your manuscript will be in exactly the same spot – unfinished and unsold.

The problem is, when you take five or ten years to finish your memoir, you can miss all sorts of opportunities such as a relevant and timely global ‘hook’ to sell your story. Case in point: one of my memoir students whose divorce memoir had a hook involving the GFC of 2008. This has quickly been usurped by the issues we’re facing in 2022.
Making these mistakes often means you then start to tell yourself all sorts of stories like publishing is impossible and no-one is buying memoirs anyway.

Wrong!
I’ve been seeing so many great deals happening during the pandemic. Just this last week, I’ve seen so numerous acquisition announcements made on Twitter – even in Australia, even in an industry hit by layoffs.
Tiffanie Drayton sold her memoir to Penguin Random House on Tuesday, which was announced in Publisher’s Weekly along with roughly 40 deals (and these were just the ones mentioned) every day this week!
Bottom line: stories are selling, just as much as ever. People can read (and write) manuscripts from home, so this should not affect your decision to pitch or not.

I’ve shared before about how quick the memoir publishing journey can be, but I often hear from writers who think I was “just lucky”, it was because my memoir had “Paris” in the title (fact: – it didn’t have Paris in the title when I sold it!) or because I had some mysterious literary ‘connections’ who gave me some kind of golden ticket.

You know what I believe has made the biggest difference in my publishing journey – both with Love & Other U-Turns (my first memoir) and A Letter From Paris (my second memoir)?
Not that I was an amazing writer. Not that my topic or story hadn’t been covered before. But I got it out there.
and the reason I prioritised getting it out over making it perfect was because I had worked as a freelance writer for ten years. Before you use THAT as an excuse for why I was published and you can’t be, understand that thousands of by-lines are now redundant with the disappearance of print media – and I didn’t have twitter and Facebook didn’t even have business pages when i pitched my first book.
BUT – the very fact that I was able to make my living from selling stories demanded that I see writing in one way, and not the way most (unpublished) writers see it.

AND – this is the big difference I see with those who get a book published or not.

Getting published is simply a sales game. Whenever I wanted to increase my likelihood of getting published – of making more story ‘sales’ – I would send more pitches or hone my topic and targeting.

But let me break this down for you, because chances are you’re working on this beautiful book of yours and don’t have a history as a freelance writer to guide how you approach its publication. 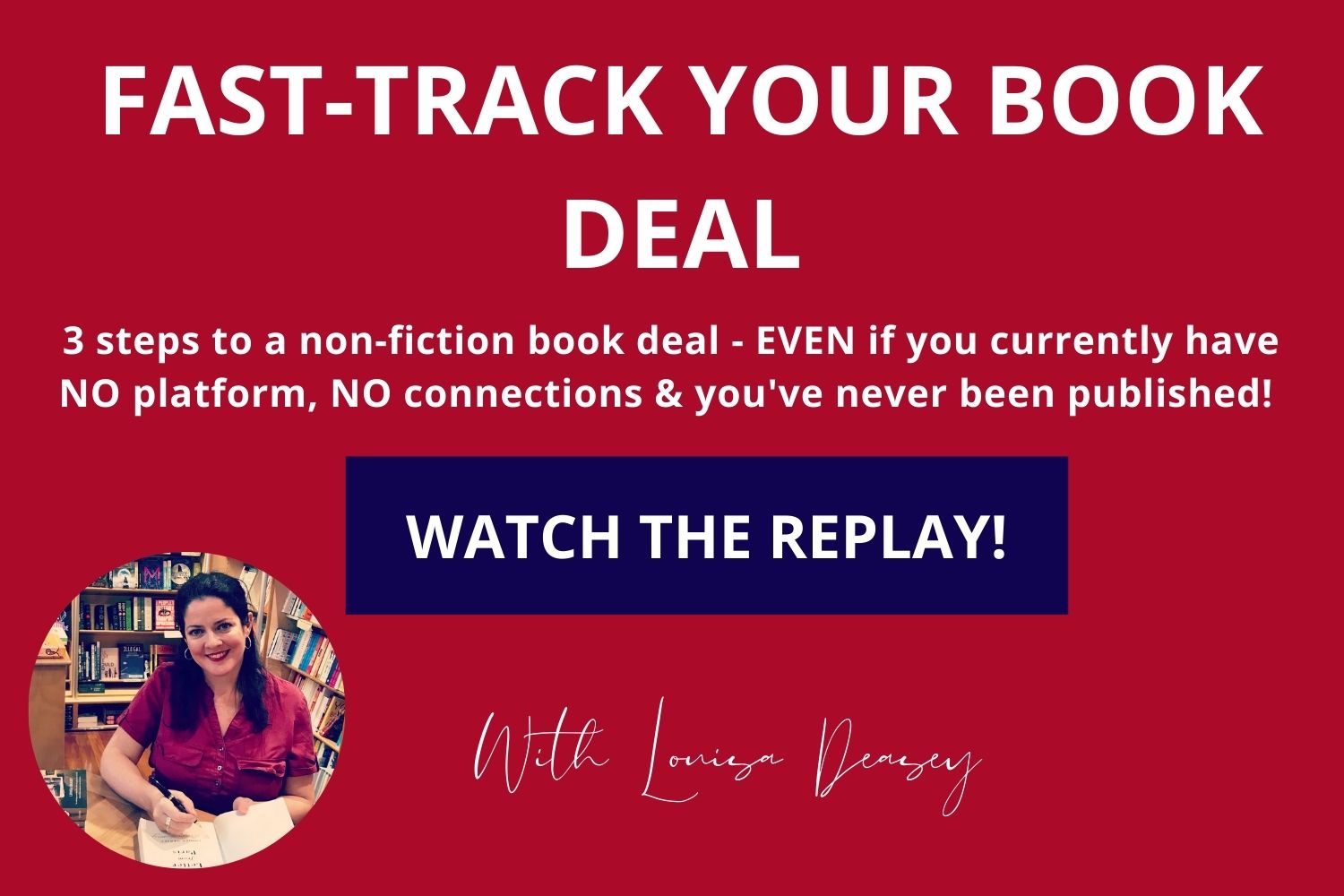 Mistake number 1: You’re getting too much feedback and advice

Here’s a short list of who NOT to show your manuscript:

Yes, I know you want feedback. I know you’ve spent months – probably years – crafting this book. It’s natural to want some assurance, or even just a nice positive “well done!” and acknowledgement of this momentous achievement of getting it down as a story.

But this can unintentionally sabotage us.

You may want to know whether or not your writing is ‘OK’ but to give you an example from my freelance life, if I’d sent a wellbeing story pitch that was meant for, say, Body + Soul (health and wellbeing) to a fellow writer who had only ever been published in the hard news section of the Guardian, they would not have been able to give me tailored, specific, helpful advice to getting that specific story sold to my particular outlet.

Get specific. Drill down. ONLY seek advice from published writers who have published in your genre. This is my number one piece of advice for ANYONE hoping to get a book published.

2: You’re convinced it’s all about your writing craft

What do I mean by this? Well, take for example one of my Memoir Academy students (I won’t use her real name) who went to a very expensive writer’s retreat where they all workshopped sections of their memoir and also got feedback from the (published) workshop leader.
The feedback (on one chapter of her memoir) was great. Everyone gave her virtual claps for the descriptions, even the workshop leader (who was a published memoirist) loved the way she wrote.

Five years later – the manuscript was still unfinished.
In week two of Memoir Academy I teach the essential elements to a memoir that sells: namely the hook, the universal themes, the focus sentence, the two desires, and where the story begins. Once she had completed the week two homework from Memoir Academy – bingo – her memoir was finished – the same memoir that she’d been finessing and labouring over for years – was finished. It can be that simple. But you need to focus on sales strategy over writing craft (or at the very least, give it more attention than you have been!).

The thing is – you need to be able to write. Certainly. Construct some nice sentences, and write enough of them (80 000 words or so) to call it a manuscript draft. Understand story structure. Understand narrative. Read widely. Learn to self-edit.

But if you want to get published?

Go from craft to sales. Just as I did when I was pitching stories of 1000 to 3000 words to print publications such as Vogue or The Age or the Sydney Morning Herald, I had to send a certain number of email ‘queries’. I had to know who wanted what sort of pitch in what way (full article, or one para ‘pitch’?). I had to see what else they’d published and what sections were commissioning freelancers.
It’s the same when you’re hoping to sell your memoir. You need to write your synopsis (yes, BEFORE you’ve finished your manuscript!). You need to focus on your hook. You need to find comparative titles – and who is publishing what. In short: you need to think more about sales, and the timeliness of the story, and less about the writing.

Why? Because the writing will never be perfect. And you will always find something new to finesse. No story will ever be perfect. Yes, you might get published and regret some of the sentences or want to change things. Accept that!
Plenty of terrible writers get published, and plenty of really great writers don’t get published. The difference is who is out there, actively pitching, marketing their work.
It was the same when I was freelancing. Was I the best freelance writer in Australia? NO way! But I committed myself to pitching and making connections with editors. This is what enabled me to make a living from selling stories (notice how i don’t say from writing stories. Writing stories does not a living make – unless you sell them!).

YOU’LL ALSO LOVE
The problem with manuscript critiques
How to get a nonfiction book published
What’s your story hook?