What is a writer’s platform?

Platform is an important concept to understand if you want to get a nonfiction book published and you’ll hear it bandied about everywhere in publishing circles. So what is a writer’s platform?
And – why do you need a platform, particularly if you just want to – um – write your books or articles?

Writer’s platform: What it isn’t

Some writers think platform is about having celebrity levels of influence and other think it means having a certain number of followers on twitter (or facebook, or tiktok, or instagram, etc etc). Neither of these things is completely true.

An example of a writer’s platform

[The following info comes from an interview in the book Scratch: Writers, Money & the Art of Making a Living]
When Cheryl Strayed sold her blockbuster memoir WILD to Knopf publishers for $400 000 in 2009, her writer’s platform was really very literary: aside from some freelance journalism, she had been one of two anonymous advice columnists ‘Sugar’ for The Rumpus, she’d published a fiction novel (Torch, 2005), she went to AWP [the Association of Writers & Writing Programs annual conference] every year and taught writing, and she had a memoir essay published in esteemed literary journal The Sun in 2002: The Love of My Life. [Brace yourself before you read it, it’s breathtaking.]
Social media wasn’t really a thing at the time, Strayed was an unknown out of her literary community and definitely was NOT a celebrity. But if i were to pinpoint Strayed’s ‘platform’ I’d say said it was her literary community and relationships, particularly at the Rumpus, where she wasn’t paid for her advice column Dear Sugar. She loved her work, she loved the art of it, and she genuinely valued her community and being a part of it. This is the thing. When we are fascinated by our work and genuinely want to communicate with other people who want and know and are interested in our work, that’s a fair sign that we will be successful! And being a contributor to The Rumpus, and building so many multi-layered relationships and connections (and good writer karma) by being an unpaid contributor, would have counted for a lot. So all these many-layered relationships and community, built up over years of writing, were what built Cheryl Strayed’s writer platform.

So what is a writer’s platform?

The simplest way I can explain a writer’s platform is to say it’s your public presence and your professional reputation as a writer. Your writers platform is made up of your literary connections, the sum of your published work, your reputation in the particular area or niche that you’re writing in, and most importantly, it’s your level of visibility among your target audience.

Why a writers platform matters

The key to understanding why a writer’s platform matters is understanding how traditional publishing sales works. As I teach and share often, it all comes down to knowing your audience (who wants / needs / is fascinated by your genre and your story’s topics and themes?) and how can you build your visibility among them?
The reason platform matters so much in traditional publishing is because of something so many writers forget when they’re pitching books: A publisher needs to have some sense that the author has the ability to reach a wider network than just those who stumble upon it in a book catalogue or a bookshop new release window. A publisher needs an author to sell thousands of copies of a book in order to recoup the production costs of publishing it! Publishers are NOT marketing houses, they are essentially production houses. They produce books. And sales and marketing teams need to agree that a book will be a solid investment or at least a ‘low risk’ if they are to buy it.
So, building your platform as a writer is the very best thing you can start to do if you want a long and successful career in publishing.

Something I see all the time with writers building platform is thinking platform is one thing and focusing on that above all else. Then, they’re disappointed when they reach the magical number of twitter followers / New York times or published articles / number of connections etc. and they STILL don’t have a book deal for their nonfiction.

Aside from being a miserable way to live (thinking that you need to pitch 5 articles a week, increase your twitter following to 10 000 and asking everyone and his dog to follow you for no reason at all, or meet the right agent at a conference so you’re investing in all these conferences when you’re really an introvert and would prefer to stay home and read), platform isn’t this magical figure that you somehow ‘reach’ with enough work.

The best writer platforms are authentic and natural and grow from who the writer honestly is and what they love to write about, think about, talk about and who they build relationships with (because they want to, not because the person is a good ‘connection’). Genuine curiosity, paying attention to who you are and what you want to write about, how you want to be known and what you want to share with the world is the best way to think about platform building. And it’s not ‘one’ thing, like your twitter following. It’s the sum total of your relationships with your audience and your visibility among said audience.

“But I see all these celebrities getting book deals”

Celebrities get book deals because they have a ready-made audience among those who are interested in their specific topic or niche. This is why we saw all these cookbooks coming out in Australia a couple of years ago (when we were also going through a Heyday of Masterchef-style shows like Ready, Steady, Cook). It’s makes sense that the audience watching those cooking shows would also buy a book by the chef. Celebrities have ‘brands’ and brands are powerful because people like any products released by the brand. Another huge publishing hit in Australia has been The Barefoot Investor by Scott Pape. The book has sold millions of copies worldwide since its release in 2004. While Pape was NOT a celebrity when the book was published, like many successful nonfiction authors, he had built platform among his target audience. At the time he inked the deal with Wiley, he had a weekly finance email newsletter he sent to his stockbroking clients. It wasn’t until AFTER the book deal that he started writing syndicated columns for NewsCorp, and regularly appearing on TV and radio.
Pape’s story is just one example of how to build a writer platform without being on TV or an instagram star.

A kinder way to re-frame platform


A nice way I like to think about writer platform is that it’s simply the sum total of your relationships with people who want to know the stuff you’re writing about. So if you’re a nonfiction writer with a memoir about a traumatic brain injury, you will build your ‘platform’ by writing and pitching stories to those who are interested in and invested in this information. Where do they hang out? What do they read? How can you reach them?
I’ll never forget my first book launch which i hosted at a theatre and invited all my friends and family instead of a general event that was open to the public. We sold out of books in the first twenty minutes,  and the bookseller who had come armed with 20 copies he thought he’d be schlepping back to the shop with his arms full, instead he had to sprint back to get two more boxes! Me selling my book to people i’ve never had any connection with in the past is a lot harder than what is referred to as a ‘warm’ audience in sales and marketing. And a ‘warm’ audience is your platform: people who are curious about, interested and invested in what you have to say. 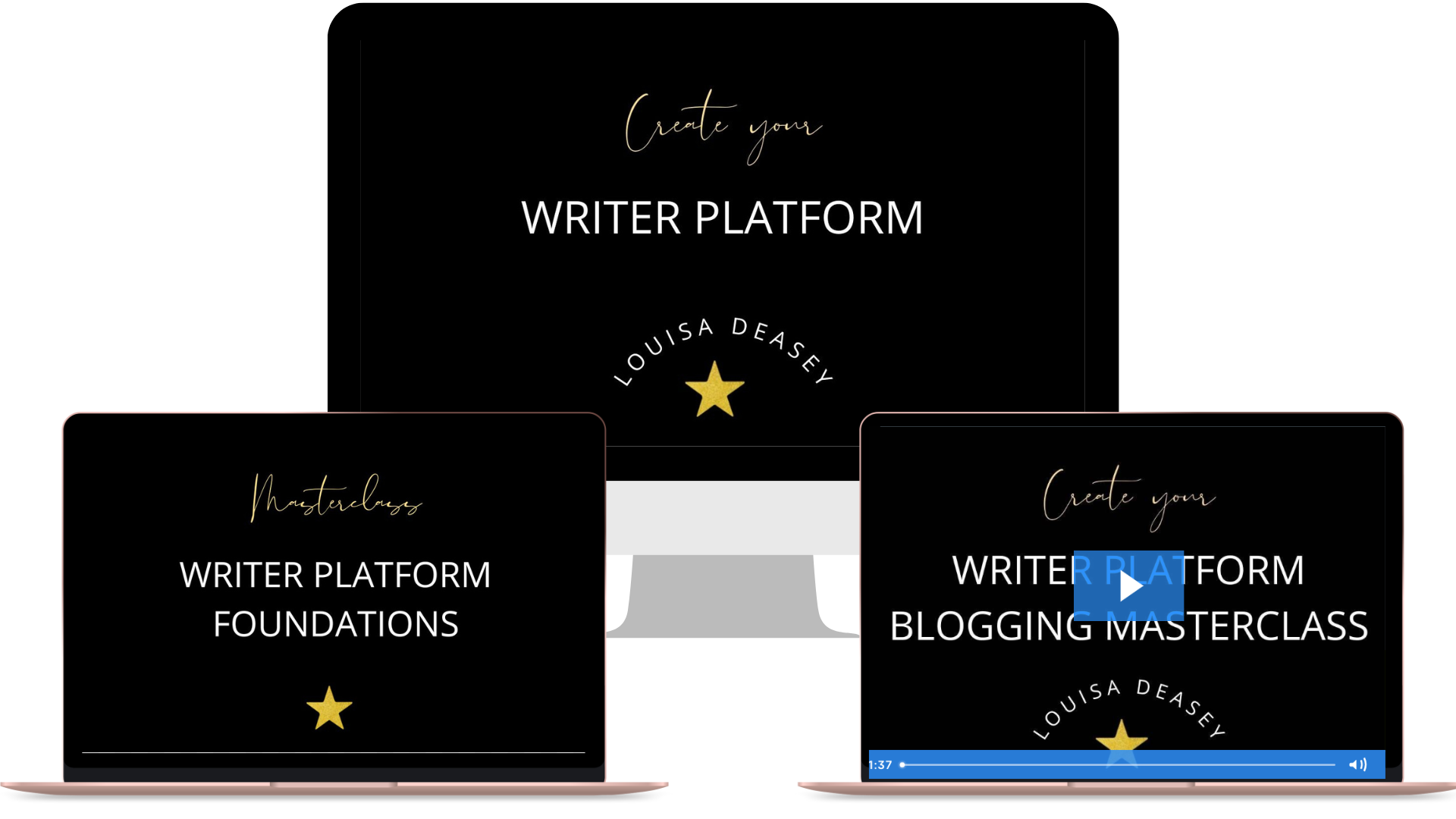 The wonderful thing about living in the era of the internet is that we have SO many more options for building an author platform – which is, in essence, relationships with people who are interested in what we have to say.
My favourite ways to build a writers platform include:

You could also start a podcast or a you-tube channel.

It’s important to harness the basics of the digital world if you want to get your work seen in 2020s and beyond. This isn’t 1947 when you had to lug a heavy typewriter around, post a manuscript and wait months and months for a handwritten reply. Things can happen so fast – it all starts with building relationships with people who care what you have to say. How do you find them? By clarifying your audience first and foremost, and then adding value to their lives with your writing!

So I hope this post has made you clearer on what is a writer’s platform and why you should start building one if you’re a nonfiction writer looking to get published. If you want to learn the basics of setting up your writer platform you will LOVE my new program: Create your Writer Platform.
This walks you through setting up your writer’s website, your email newsletter, your social media channels and your blog and it’s specifically for nonfiction writers wanting a traditional book deal.
I love teaching this stuff because it’s so empowering to see writers transform from thinking they must get published in the New York Times or they’ll never get a book deal. We have a lot of power to get our work out there – it just takes knowing a few tricks of the (google) trade and setting things up correctly from the start!