Whether you’re harrowed from what’s going on in the world right now or just feel a sense of exhaustion every time you pick up your memoir, there’s ways to work on your manuscript without writing a thousand words each day. Perhaps the story of your memoir feels irrelevant right now, or perhaps it all just feels a bit heavy and depressing, and you’re not sure why. I want to share some tools and techniques I’ve used with writers in my breakthrough sessions to get you out of a slump.

I had an interesting coaching session with a writer a couple of months ago. Let’s call her *Jessie (because that’s not her name). After making it 80 000 words into her memoir first draft, she couldn’t write any more. The story had started as a sort of experiment, and sheer will had gotten her so far into the draft. But she’d learnt a few new things about herself – and her life – and the original topic seemed both irrelevant and uninteresting to her, now. But she had her 80 000 words!
Every day she’d find dozens of other things to do RATHER than work on her draft, because she wasn’t sure what to do.

We dug a little deeper, to find out what she was writing about, what else was happening in her life, why she was procrastinating. It wasn’t like she didn’t have time to write: recently retired, she finally had the time and space to do so.

But what I found was that she was working on a version of the story that had initially inspired her to write, but it wasn’t the story she needed to write. This is so very common.

Let me explain.
*Jessie come up with a certain topic – let’s say 100 ways to get fit from home (this isn’t it, but it’s similar and different enough to illustrate my point). Each day she would try three new things (which, by the way, is too much for anyone to sustain!). In the process, one of these methods – let’s say yin yoga – had really captured her attention. She wanted to deep dive into that, but she’d committed to trying three new ways every single day, and just ‘lightly’ exploring each method. The book wasn’t supposed to be about yin yoga! She had 80 000 words of material on different ways to get fit!

Rather than let go of the 80 000 words and start a new story (honing in on the yin yoga aspect), she’d stopped writing completely. A sense of disappointment in herself for not finishing the story she thought she was meant to write meant that she just gave up.

Maybe you can relate? Jessie* was the second writer I spoke to last month in a similar boat. Jane* was stuck for a similar reason. The manuscript Jane had been working on for almost five years made her feel heavy and depressed every time she opened it up. Just like Jessie, Jane slowly realised (through our session) that the story she REALLY wanted to write, the story that lit her up, was just a small section of the manuscript she’d already written.
She was going to need to cut her losses and start from scratch with what was only in the final chapter of her current draft.

Let go of the story you think you should write, and write the story that lights you up

If you’re in a similar boat, where you feel heavy and sad every time you open up your manuscript, OR It feels irrelevant or uninteresting, there’s a strong chance you’re chasing the wrong story onto the page. AND it’s making you feel awful in the process.

Do you know how many thousands of words I’ve deleted in the course of writing two memoirs? It boggles my mind, so I won’t try to put a figure on it!

I’ve told the story many times, about a particular aspect of A Letter From Paris that was 40 000 words in my first draft. By the time it made it through to the published version that thread was one paragraph.

One paragraph.
The thing is, I needed to write all that junk so that i could sift it down to one paragraph – but the creative process is messy – we will end up somewhere we didn’t plan, and the only way to get to the right spot is to try (and fail!) a few different things.

That 40 000 word section (that didn’t make it into the finished book) made me miserable to write, but i had to write it, too, because it helped me see what I didn’t want the story to be.

Write what sets your soul on fire

You KNOW when you’re writing something that lights you up. I’m not saying good writing doesn’t take work, but there’s often a reason you don’t want to pick up your manuscript – and it’s not the story that you want to be writing.

Right now, more than ever, we need to work on projects that light us up, consume us and enrich our lives, or not do them. Life – and our time and attention – is too valuable to waste on something that doesn’t matter to us.

Here’s what I advised both writers to do while they recovered from the disappointment of not finishing the memoir they thought they should write, to give them fresh inspiration and encouragement while they regathered their enthusiasm to start afresh with a new story – a story that better reflected their values and newfound wisdom. Because this is the thing with writing memoir – it’s so transformational, we often change our beliefs and perceptions around events just from the very act of writing about it.

1: Journal, but don’t work on your book

When writing is hard-to-come by, I need questions and prompts even to write in my diary in the morning. At the moment I’m finding it hard to concentrate so I use some list-based prompts (2 things I’m looking forward to, 2 things I’m grateful for, 2 things I will focus on…) as well as some extra mood-boosting focus prompts I recently added to my memoir journaling program.

At the very least, keep a record of your day.

Through repetition and tuning into your inner guidance through mindful journalling, you might find a new pathway into your book. At the very least, you’ll be getting mindful and continuing to ‘write’ even when you’re not writing, implanting you with that ‘sense memory’ of continuing to write, no matter what. 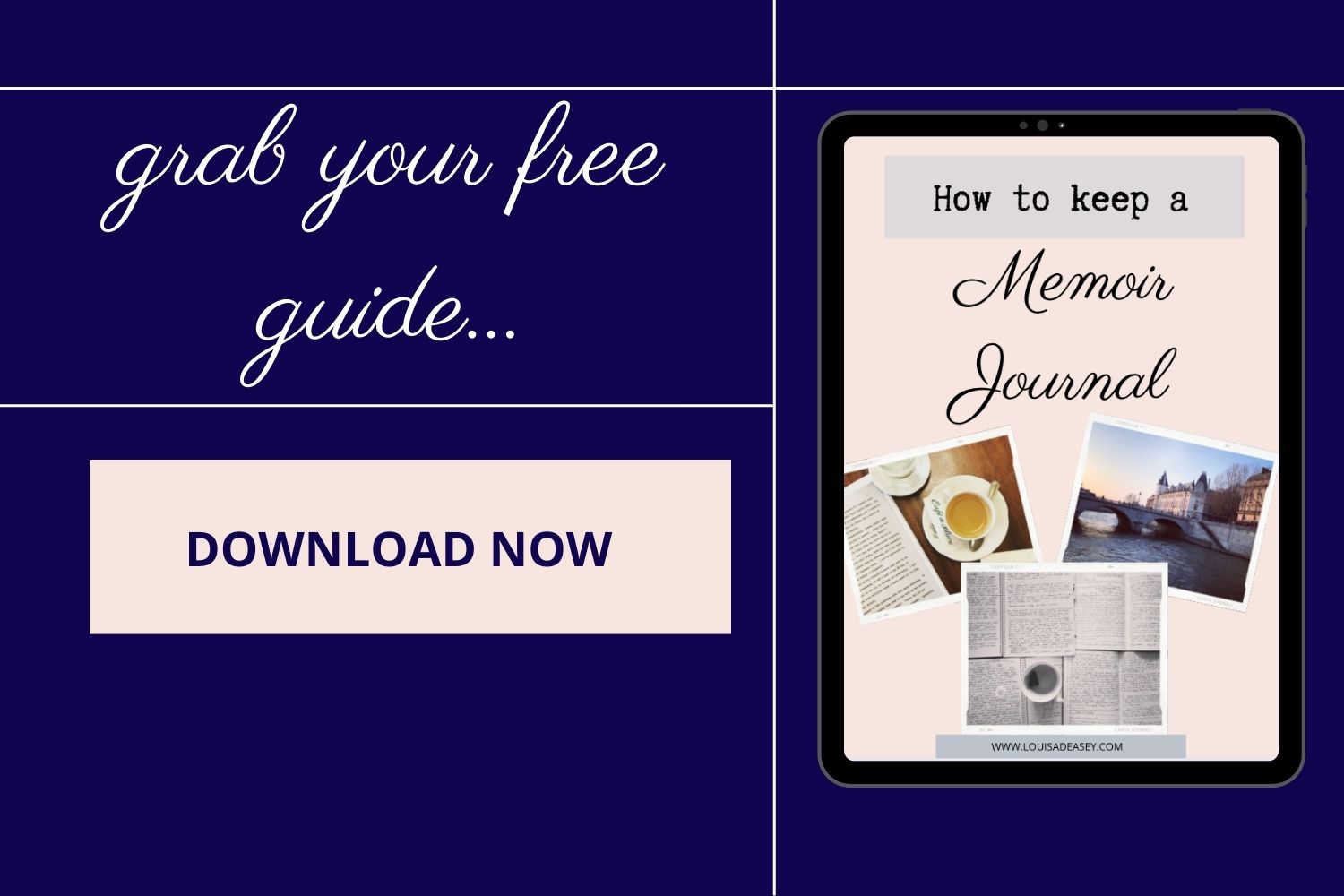 Make it a personal project to find 2 or 3 new memoirs which have a theme or element similar to the kind of book you’d love to write. This is so important. When you can’t write or work on your memoir, or you don’t have the enthusiasm for it, sometimes the only thing to do is to read. When you find something written so beautifully, you’ll be inspired and encouraged to start back at your book, to attempt to create something that will connect with strangers in that way, too. Take notes with memoirs you love – look at how the way in which the story (and the narrative) is revealed, how and why you identify with the narrator, intros and endings, even smaller elements that might be similar or different to your story.
I’m reading Maybe You Should Talk to Someone by Lori Gottlieb at the moment (psychology/memoir) and it’s fantastic – all my favourite things about memoir. I’ll post an in-depth review, soon.

Often I need to work with a different medium to get my enthusiasm for writing back. It helps to do something that gives you immediate and tangible results. Whether it’s cleaning the house, cooking a new dish, gardening or photography or macrame or even playing the piano, it can relax that part of the brain that’s intensely focused on what’s NOT working in our story and our manuscript. It’s like that genius part of our brains comes back when we aren’t actually focused on the problem at hand. Bingo! The solution comes midway through playing Beethoven’s Sonata.
By creating something different (a garden, a meal, a piece of music), we can feel encouraged enough to pick up our heavy manuscript because we’ve had a fresh reminder of our ability to create something beautiful and meaningful in this world.

4: Start back in the good place

When you DO pick up your manuscript again, find the part of it that you DO love re-reading and working on. Cut that out. Put it in a new document, and start the new story from there.
For example, Jane’s story was (she thought) about grieving someone. But when i asked her a few key questions about that person, and their life together, and what she wanted to achieve from her memoir, it turns out the story was about something completely different: their incredibly unique and fascinating life together.

Often the story isn’t what you think it is, at first. And the story that got you starting the book isn’t the story that the book will end up being.  In a writing breakthrough session I can look at your story in more detail and make this advice more personal, but I’ve noticed quite a few writers share this same dilemma, of writing a certain amount of words and then realising that was great to get them writing, but it isn’t the story they want to finish.

Be brave enough to cut your losses, lick your wounds, have a break, and start again.
And read some great memoirs to get your enthusiasm back.